In a tight economy today Living Social has been a great way to get discounts on services, entertainment, and dining.  It’s a bit of a gamble since you don’t truly know what you’re getting into till you’ve already paid for it.  Some things are worth the gamble, but is hair one of them?

When a salon service becomes a bad experience it usually can’t be unnoticed.  Unless you wear a hat for a few months someone is bound to see the humiliation you paid for mounted on your head.  My recent experience was by far the worst I have ever gone through in my 31 years of life.

Being new to town I looked up Living Social deals for local hair stylists.  Kathi Rose Color Specialist seemed like the best deal at the time so I looked up her Yelp reviews and website.  The Yelp reviews had six people giving her a 5 star rating.  For those of you that don’t know, 5 stars means the best.  On her website she had 30 years of experience doing hair and seemed to know exactly what she was doing.  As for me, this sounded like there was no way I could go wrong with Kathi Rose Color Specialist.  So I bought the $72 living socials deal and made an appointment.

I wanted the usual services that I have been getting for the past 10 years or so; partial blonde highlights and a trim.  This service included partial highlights, hair cut, style, and deep conditioning.  My hair is very fine and mid length, about to my shoulders.  It is very fragile and breaks off in the back so the back of my hair looks like a “V” cut if I don’t get it trimmed regularly.  It had been a long 6 months since I had been to a salon so I was way over due, money was tight.  A fresh color and cut is exactly what I needed.

Day 1 at the salon with Kathi Rose was a little hectic, I was about 25 minutes late.  My Apple iPhone GPS took me to the wrong address and I was pretty confused.  When I got there she was in a huge hurry and handed me a robe to put on.  I told her I just wanted partial highlights and a trim.  Keep in mind she didn’t know me and has never seen me as a client before.  She immediately suggested she wanted to try something new with me.  She wanted to give me gold and blonde highlights.  I said no thank you, with no hesitation.  She said it again, insisting she wants to try something new on me.  I said no I just want the blonde highlights.  While she was foiling my hair and pasting bleach on my head she said she was just going to do a full head highlight and not a partial.  She said no charge no charge, I’m doing a full.  I didn’t really want a full since my hair is fine and I never get a full.  Since she had already slapped a few bleach foils in the back I couldn’t say no by then.  She gave me no choice at that point. I felt she was being pushy and not listening to what I wanted.

After the foils were completed and the wash was done it was time for the cut. I just want a trim, my hair grows uneven in the back because it breaks off so I just want it even.  Again, not listening to me she gave me a “V” haircut with a chunk of bang in the front that I did not want or ask for.  The back was kept short and the front was left long like when I came in.  She said it looks much fuller like this and gave my hair more body.  I wanted her to even it out but after seeing how she cut it and knowing that she was not listening I didn’t say anything to her about not wanting it.  I knew then that if I told her I wanted it even it would be super short and not what I liked.

Now this is the part I know that every girl can relate to.  There’s something about sitting in a salon chair that makes you vulnerable.  I compare it to sitting in the doctor’s office.  You have all these problems but once the doctor gets there your memory suddenly wipes and you agree on everything.  I feel like when I’m in the salon chair and I’m checking out my hair after they are completed, I get too nice and cut them a lot of slack.  Usually I don’t find problems till I go home with a clear head and comfortable environment.  Another thing is I don’t want to insult the stylist.  In a way it’s their art and it would be like throwing a tomato at their painting saying they need to repaint it. Well, this is what happened to me.  Except when I went home I really wished I had a large tomato to throw at my own head to cover the mess that was happening.  I called her the next day to reschedule an appointment to get all the way to the root and blend the straight lines she made at my hair line around my entire face.  It was a bad weave and I was not happy at all.

Day 2 at the salon with Kathi Rose.  I was 15 minutes early and she was incredibly hectic, chaotic, and it seemed like she was talking a million miles per second.  I looked wide eyed at her in confusion and she looked back and fake laughed. Oh-boy. I should have ran then.  Basically, here’s how it went down on day 2.  She didn’t think she could get all the way to the root to make it not look like I had major regrowth and was not confident that her skills and knowledge were capable of this. 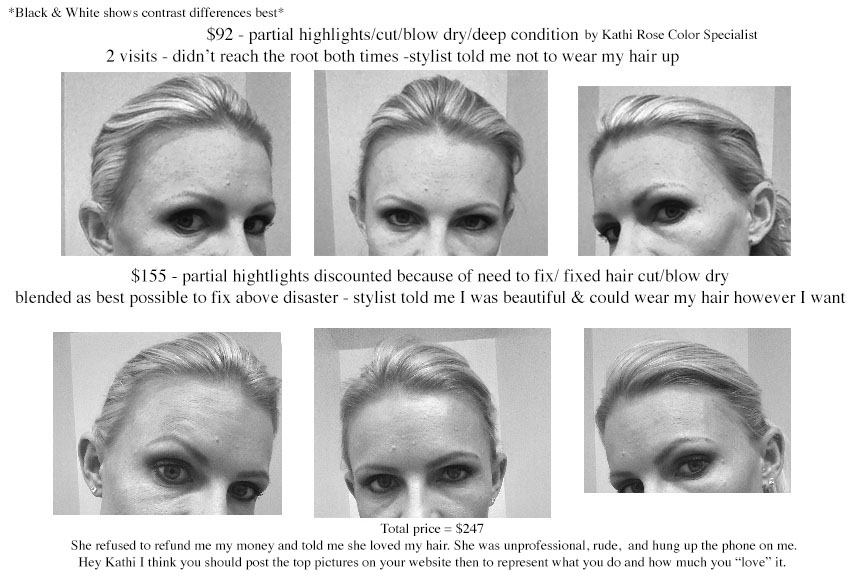 I knew right then that she had no idea how to do proper highlights and didn’t know how to fix her first mistake.  By this time she was already done attempting to fix it.  I asked her if she liked my hair when she was done, her response was, “Absolutely I think it looks great.”  I didn’t say anything out loud but knew this was a disaster.  I just sat there and listened to her for about 5 minutes talk about how she just couldn’t get it to the root. She kept saying if I went all the way to the root it would bleed. She repeated herself about 15 times in 5 minutes saying the same thing over and over.  (Huge pet peeve of mine by the way.)  Then in the middle of all of her, “Oh yes I love it speech,” she says to me, “Just don’t wear your hair up for a while.” Really? That’s what you’re going to say to me, don’t wear my hair up?  I wear my hair up every single day.  Why did I pay her? I left quietly but pretty stressed out.

I found a salon nearby and walked straight in and showed them my hairline and they knew immediately I had been a victim of a bad hair stylist.  They assured me that any person in this salon could fix my hair and make it look better, guaranteed.

Day 3  at the new salon, The Canyon Salon.  Of course I was nervous after the horrendous experience with Kathi Rose, but had a good feeling about this place.  The new hair stylist, Heather, was very sympathetic.  She never let me know she didn’t think she could do what I was asking for.  She carefully blended the best she could so the harsh dark harsh line wasn’t as harsh.  She also fixed the cut to what I wanted and asked for, listening to me and being incredibly nice.

I called Kathi Rose a few days after I got it fixed, which was my 3rd visit to a salon it 4 days.  I told her I was unsatisfied with my hair and had to go to a different stylist to get what she did fixed.  I want my money back.  She got angry with me and refused to give me my money back because she loved it.  She said it is not her fault that I went somewhere else after her and that it was my choice to get it fixed.  I tried to tell her how unprofessional she was and explain to her why I didn’t like it and then she hung up on me.  An hour later she called me back.  Instead of saying hello when I answered she said in an angry voice, “Did you call me?” “No you hung up on me,” I said.  Then she begins to yell at me and tell me that she hung up on me because I was talking over her.  Keep in mind that she doesn’t listen.  I just wanted my money back simply because I had to spend even more to get what she did fixed.  She refused to repay me and told me she loved my hair.  I then said, well let me send you pictures of what you did the second time and what it looks like now after its been fixed.  She said great send it.  Then I cleverly said, If you love my hair so much then you should post the pictures I send you and put them on your website to represent what a great job you did and how much you love it.  I don’t think she liked that suggestion.

I’m not sure how someone working for 30 years as a hair stylist, calling themselves a color specialist, does not know how to properly do blonde highlights.  She was stunned when I told her another stylist got closer to the root and blended it so it didn’t look like a straight line.  She said she doesn’t understand how the other stylist did it. Kathi my suggestions are simple: Education and a Q-tip.

So for those of you wanting a great deal from Living Social or a Groupon, I would stick to entertainment.  Hair is worth the extra money and research before being someone’s ginny pig experiment.  Lesson learned: Never gamble your head.

"Whether you think you can or can't, you're right." ~Henry Ford View more posts